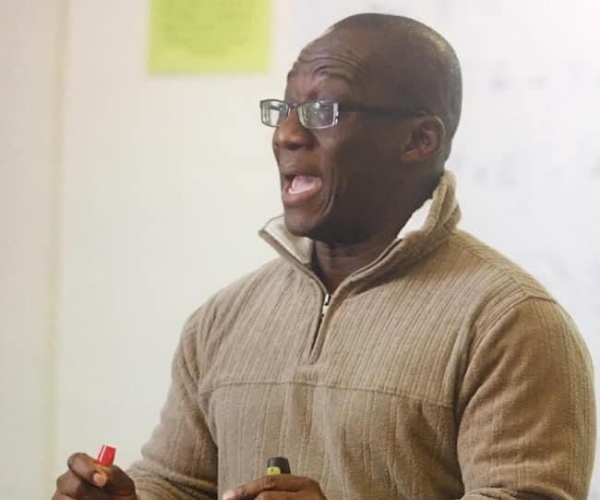 When he crossed the finish line in that 400m race at Accra Stadium in 1983, he collapsed and passed out gushing out his intestines. A panicky Sports master B. T Akrong waved frantically at the ambulance parked nearby beckoning it to attend to the near death situation unfolding. It was when the ambulance driver complained of faulty battery and requested we give the vehicle a push that we decided to revive Nii Adote. A bad breath CPR was enough to bring him back to life. By that emptying of tank performance, Nii Adote inducted himself into the class of resiliency.

Roland Nii Adote Abrahams came to Presec at age 10(an unmatched record) and as he stood in front of Clerk House Common Room that Wednesday afternoon in September 1976, was mistaken by many to be a junior brother of an arriving freshman. It was during dinner when he was seen seated and fighting with his cutlery set that his freshmen mates realized he was one of them. His buddies in the junior forms were Max Ahene and John Teiko aka Stone. Victor Bruce, Sam Addo (Obito) and Caro Datsa were his confidants in sixth form. He engaged in three fights in Presec; lost two and one declared a draw due to his persistent clinching. Biology tutor Mr Annoh an Odadee and a School Prefect in his days was his favorite tutor. Saturday afternoon meal of kenkey and sardine with black pepper was a meal he looked forward to with great anticipation. Prof Nii Adote served Presec as Sports Prefect and did 400m, long jump and triple jump. He was triple jump champ during 1981 Inter Houses Competition. He also played volleyball for Presec.

Rolly as he was nicknamed, holds B.Sc. (Hons) Agricultural Science from the University of Ghana, Legon, an M.S. in Resource Economics from University of Massachusetts Amherst and a Ph.D. in​Agricultural Economics Penn State University. He has held various positions including Department Head of Finance, Economics and International Business at The Robert W. Plaster School of Business Administration at his University. He currently serves on many committees and a visiting professor to other institutions of higher learning.

Always seeking to conquer new frontiers, Nii enrolled in Bible School when the Call to work in the Lords Vineyard came. He was subsequently ordained and was Associate and Worship Pastor at Galena Assembly of God in Galena.

First of six siblings two of whom also attended Presec, Nii Adote is a good cook; a Jollof specialist par excellence. Like his dad, Nii loves to sing and though his hoarse performance at a Gospel event at Aburi Girls in 1978 led to Aburi Girls blacklisting Odadees gospel artists for 2 years, Nii is undaunted and continues to sing till today.

Benevolence flows through the Abrahams family. Nii Adote’s home at Legon Staff Village was a virtual soup kitchen for students and teaching assistants. Nii took after his mum who always had a meal for the midnight visitor. Generous and kind to all, Nii Adote is a stalwart of the Odadee movement; He was in Presec and Presec is in him. He is the current Treasurer of the North American Chapter and Council Member of 1981 Year Group.

Despite Odadee Nii Adote’s niceties, he is principled to a fault; independent minded, eschews laziness and holds men to the high standard virtues of hard work and morality. He believes in the sanctity of the marriage vows and advises men not to stray. Sadly, his advice has gone unheeded. Nii Adote is married to Faustie and they have raised and groomed two boys into gentlemen. God is good. The same boy who played chasskele now plays golf to stress out.

Good job Faustie. The credit is yours for taming this rambunctious troublesome brother.