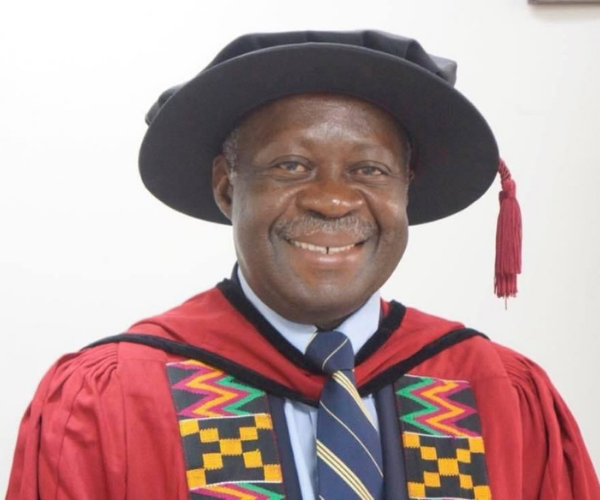 As he took the Hippocratic Oath in 1982 amidst rapturous applause, a fulfilled Kwadwo Koram our newly minted medical doctor’s mind raced to where it all begun. Mamfe Presbyterian Primary school, to Akropong Presbyterian Middle Boys boarding School following in the footsteps of his dad and brothers before him and then to Presec. Then he teared up when he remembered his grandma whom he stayed with during his school going age as work of dad & mum saw them traveling extensively. If only she was around to see the fruit of her toil.

The intake class of Sept 1969 saw a new site Presec compound in its glory; Young Elm trees lined entrance driveway, five halls of residence (Labone not yet constructed), a well lit central classroom block, a well ventilated Assembly Hall, an octagonal shaped dining hall, fully equipped kitchen with imported steam boilers from UK, paved walkways, Sick Bay, masters bungalows and a sewerage treatment plant that produced manure for its school farm. Roses have thorns so the daily encounters with snakes and scorpions continued unabated. When you have mates like the late Reginald Asare aka Ashalley Cooper, “When Shall I?” Charles Addo, Ambrose Asamoah, the late James Tetteh (former Maths teacher at Presec), Acheampong and Daniel Osafo (True mom), you get the best social bonding that equips you for life. Odadee Koram was in Engmann House from 1969-1973 and in Riis House from 1973-1974 following the reshuffle after the completion of Labone House.

The unexplained academic nutrients in Presec Gasso stew and the Friday Oblayoo breakfast was at work so Senior Koram proceeded with distinction to Mfantsipim for Sixth form, University of Ghana Medical School, Tulane University in New Orleans, United States for Masters in Public Health and PhD at the prestigious London School of Hygiene and Tropical Medicine under the tutelage of Professor Sir Brian Greenwood.
Odadee Koram worked as Medical Officer and District Medical Officer at Bawku Presbyterian Hospital for 6 years after completing his house job in 1982. In 1993 he began work with Noguchi Memorial Institute for Medical Research (NMIMR) as a Research Fellow. At Noguchi, Prof Koram served as Head of the Epidemiology department, Deputy Director and ultimately Director of the Institute, a position he held for five years. Prof. Koram established and led several collaborative projects on malaria at the Institute. The partnership with the Centre for Medical Parasitology, University of Copenhagen on the Immuno-epidemiology of malaria has been running for more than 20 years. The collaboration produced several PhD graduates who currently serve in the Institute

For several years, Prof Koram coordinated and taught Principles of Epidemiology for the MPH course at the School of Public Health (SPH) from the inception of the School and later, in collaboration with other colleagues developed and introduced the MSc Clinical Trials programme at the school. Prof Koram has supervised or co-supervised 26 Masters, 9 PhD students and 4 post-doctoral fellows. He has authored or co-authored more than 100 publications in peer reviewed journals. Between 2014 and 2016, Odadee Koram was a visiting Professor of Tropical Medicine at the Tokyo Medical and Dental University (TMDU). He has served on national and international bodies too many to enumerate. ‘Jaws’ as he was nicknamed in Presec, is a member of the coordinating team for the Gates Foundation sponsored Post-doctoral training fellowship in infectious disease research at the Noguchi Memorial Institute. He was a founding member of the African Malaria Vaccine Testing Network (AMVTN) and has served on several advisory committees to the WHO on malaria vaccines and lately on Ebola Vaccine trials.

The ‘Remarkable Episode’ of 1972 is now part of Presec folklore. Its comic relief lingers till today. Odadee Koram remembers the incident very well: Aburi Girls had joined Presec for Entertainment and an over-enthusiastic Dining Hall Prefect trying to impress the babes got chocked on the adjective REMARKABLE as it stuck in his throat. The various versions of his struggling pronouncement and conjugations of REMARKABLE became embarrassing and a thunderous standing ovation from students provided an escape route off stage. What followed days after showed why Presec boarding life is the best. Mischievous boys met and decided to rub salt into injury. An old tape recorder was found and enactment of the drama was recorded and surreptitiously played in the dining hall on Sunday morning breakfast when the place was usually quiet. Dining Hall Prefect was embarrassed a second time. A full scale investigation was ordered to bring those behind to book but the Presec unwritten law of omertà stalled the investigations and no one was nabbed.

Jaws collected several prizes in Presec but not on a silver platter. The competition was fierce; Odadee Charles Addo snatched some prizes from him. Every student of Presec tried his hands with the hockey stick at PE. Odadee Koram added to the number; that was his best attempt at sports though he tried to make amends with tennis later in life. Prof. Koram loves listening to classical music and playing Twi hymns on the piano. He enjoys dancing but that is certainly not one of the things he excels at. Odadee Koram who currently operates a private clinic named Family, Friends and Anyone Clinic, is married to his childhood sweetheart Naa and they have a son, Kwame. Makpor his favorite food in Presec features prominently on the family menu on weekends.

Prof Kwadwo Ansah Koram, thank you for putting Presec on the world stage.